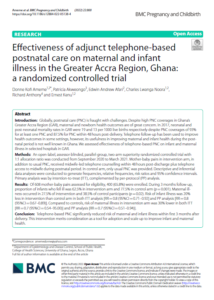 Introduction: Globally, postnatal care (PNC) is fraught with challenges. Despite high PNC coverages in Ghana’s Greater Accra Region (GAR), maternal and newborn health outcomes are of great concern. In 2017, neonatal and post-neonatal mortality rates in GAR were 19 and 13 per 1000 live births respectively despite PNC coverages of 93% for at least one PNC and 87.5% for PNC within 48 hours post-delivery. Telephone follow-up has been used to improve health outcomes in some settings, however, its usefulness in improving maternal and infant health during the postnatal period is not well known in Ghana. We assessed effectiveness of telephone-based PNC on infant and maternal illness in selected hospitals in GAR.

Conclusion: Telephone-based PNC significantly reduced risk of maternal and infant illness within first 3 months after delivery. This intervention merits consideration as a tool for adoption and scale up to improve infant and maternal health.