Home > Resources > Effectiveness of social and behavioral change communication intervention to promote the use of 7.1% chlorhexidine for umbilical cord care in hard-to-reach rural Bangladesh: A mixed method study 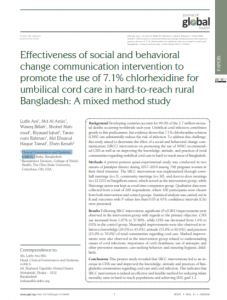 Developing countries account for 99.0% of the 2.7 million neonatal deaths occurring worldwide each year. Umbilical cord infection contributes greatly to this predicament, but evidence shows that 7.1% chlorhexidine solution (CHX) can substantially reduce the risk of infection. To address this challenge, this study aimed to determine the effect of a social and behavioral change communication (SBCC) intervention on promoting the use of WHO recommended CHX as well as on improving the knowledge, attitude, and practices of rural communities regarding umbilical cord care in hard-to-reach areas of Bangladesh.

A pretest-posttest quasi-experimental study was conducted in two unions of Jamalpur district during 2017-2019 among 748 pregnant women in their third trimester. The SBCC intervention was implemented through townhall meetings (n = 3), community meetings (n = 30), and door-to-door meetings (n = 22 223) in Dangdhora union, which served as the intervention group, while Hativanga union was kept as a real-time comparator group. Qualitative data were collected from a total of 200 respondents, where 100 participants were chosen from both intervention and control groups. Statistical analysis was carried out in R and outcomes with P values less than 0.05 at 95% confidence intervals (CIs) were presented.

Following SBCC intervention, significant (P < 0.001) improvements were observed in the intervention group with regards to the primary objective: CHX use increased from 1.07% to 57.80%, while CHX use decreased from 1.6% to 0.0% in the control group. Meaningful improvements were also observed in relation to knowledge (29.0% to 43.0%), attitude (53.0% to 90.0%), and practices (25.0% to 70.0%) of rural communities regarding cord care. Marked improvements were also observed in the intervention group related to understanding causes of cord infections; importance of cord cleanliness; use of antiseptic and other preventive measures; care-seeking behavior; and ensuring hygienic childbirth.