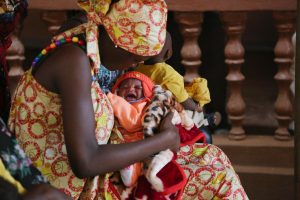 Most neonatal deaths occur in low income and middle-income countries and about half of the deaths occur at home. It is estimated that about 75% of neonatal deaths could be avoided with simple, low-cost tools that already exist such as antibiotics for pneumonia and sepsis, sterile blades to cut the umbilical cords using knit caps and kangaroo care to keep babies warm. The aim of this study is to assess the knowledge, attitudes, and practices of newborn care among postnatal mothers at Bahir Dar, Ethiopia 2016.

An institutional based cross-sectional study design was used. The sample size was calculated by using a single population proportion formula. The total sample size was 422. The collected data was coded and entered to Epi-Data version 3.1 and exported and analyzed using SPSS version 23.0. Both descriptive and multivariate logistic regression was performed.

A total of 414 postnatal mothers were interviewed with a response rate of 98.1%, among them 55.3% had good knowledge and 60.6% had a good practice of newborn care. Age of the mother, occupation, the month of pregnancy at first ANC visits, overall knowledge and attitude level was found to have a significant association with newborn care practice.