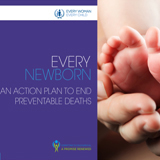 The Every Newborn Action Plan (ENAP) takes forward the UN Secretary-General’s Global Strategy for Women’s and Children’s Health, a roadmap developed in 2010 to improve women’s and children’s health and accelerate progress towards the Millennium Development Goals (MDGs) for health (1, 2). ENAP focuses specific attention on maternal and newborn health and identifies actions for improving their survival, health and development. ENAP was formally endorsed at the 67th World Health Assembly in May 2014 and launched at the Partners’ Forum in Johannesburg, South Africa in June 2014.

Intrinsically linked to maternal health, improving newborn survival and health and preventing stillbirths starts with the survival and health of women before conception and during pregnancies. The synergies between ENAP and the World Health Organization’s Strategies toward Ending Preventable Maternal Mortality (EPMM), released in February 2015 (3), will further advance efforts to end preventable deaths and improve health outcomes.

Many countries have made remarkable and rapid progress toward improving newborn and maternal health by developing action plans or incorporating ENAP recommendations into existing plans. Since January 2013, 15 of the 18 countries that were categorized with the highest newborn mortality rates or burden of neonatal deaths have taken concrete actions to advance newborn health. Many other countries have developed specific action plans or strengthened newborn components within existing plans for Reproductive, Maternal, Newborn, Child and Adolescent Health (RMNCAH).

More than 50 new commitments for newborn health have been made towards the Every Woman Every Child movement, which takes forward the Global Strategy for Women’s and Children’s Health. Global and national advocacy initiatives and events, such as World Prematurity Day and World Breastfeeding Week, have created greater awareness and have mobilized action at the national and subnational level.

Ending preventable deaths for mothers and newborns is within reach. As the global community reviews progress and reassesses strategies and financing in this final year of the MDGs, advocacy efforts are centred on three concomitant but distinct global processes: the Sustainable Development Goals, the Global Strategy for Women’s, Children’s and Adolescents’ Health and a new Global Financing Facility for RMNCH. Both ENAP and EPMM provide unprecedented opportunities to turn the tide in focusing on and addressing maternal and newborn health and preventing stillbirths.