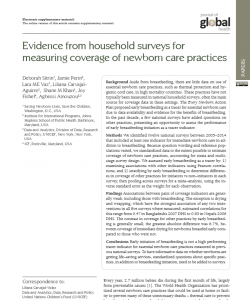 Aside from breastfeeding, there are little data on use of essential newborn care practices, such as thermal protection and hygienic cord care, in high mortality countries. These practices have not typically been measured in national household surveys, often the main source for coverage data in these settings. The Every Newborn Action Plan proposed early breastfeeding as a tracer for essential newborn care due to data availability and evidence for the benefits of breastfeeding. In the past decade, a few national surveys have added questions on other practices, presenting an opportunity to assess the performance of early breastfeeding initiation as a tracer indicator.

We identified twelve national surveys between 2005–2014 that included at least one indicator for immediate newborn care in addition to breastfeeding. Because question wording and reference populations varied, we standardized data to the extent possible to estimate coverage of newborn care practices, accounting for strata and multistage survey design. We assessed early breastfeeding as a tracer by: 1) examining associations with other indicators using Pearson correlations; and 2) stratifying by early breastfeeding to determine differences in coverage of other practices for initiators vs non–initiators in each survey, then pooling across surveys for a meta–analysis, using the inverse standard error as the weight for each observation.

Associations between pairs of coverage indicators are generally weak, including those with breastfeeding. The exception is drying and wrapping, which have the strongest association of any two interventions in all five surveys where measured; estimated correlations for this range from 0.47 in Bangladesh’s 2007 DHS to 0.83 in Nepal’s 2006 DHS. The contrast in coverage for other practices by early breastfeeding is generally small; the greatest absolute difference was 6.7%, between coverage of immediate drying for newborns breastfed early compared to those who were not.

Early initiation of breastfeeding is not a high performing tracer indicator for essential newborn care practices measured in previous national surveys. To have informative data on whether newborns are getting life–saving services, standardized questions about specific practices, in addition to breastfeeding initiation, need to be added to surveys.