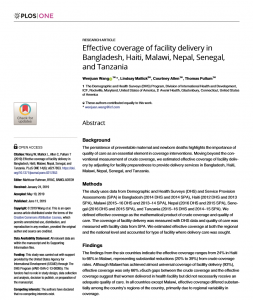 The persistence of preventable maternal and newborn deaths highlights the importance of quality of care as an essential element in coverage interventions. Moving beyond the conventional measurement of crude coverage, we estimated effective coverage of facility delivery by adjusting for facility preparedness to provide delivery services in Bangladesh, Haiti, Malawi, Nepal, Senegal, and Tanzania.

Our findings reinforce the importance of quality of obstetric and newborn care to achieve further reduction of maternal and newborn mortality. Continued efforts are needed to increase the use of facility delivery service in countries or regions where coverage remains low.