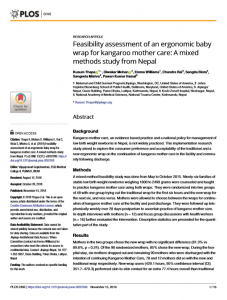 Kangaroo mother care, an evidence based practice and a national policy for management of low birth weight newborns in Nepal, is not widely practiced. This implementation research study aimed to explore the consumer preference and acceptability of the traditional and a new ergonomic wrap on the continuation of kangaroo mother care in the facility and community following discharge.

A mixed method feasibility study was done from May to October 2015. Ninety-six families of stable low birth weight newborns weighing 1800 to 2499 grams were counseled and taught to practice kangaroo mother care using both wraps. They were randomized into two groups of 48 with one group trying out the traditional wrap for the first six hours and the new wrap for the next six, and vice versa. Mothers were allowed to choose between the wraps for continuation of kangaroo mother care at the facility and post discharge. They were followed up telephonically weekly over 28 days postpartum to ascertain practice of kangaroo mother care. In-depth interviews with mothers (n = 12) and focus group discussions with health workers (n = 16) further evaluated the intervention. Descriptive statistics are presented for the quantitative part of the study.

Mothers in the two groups chose the new wrap with no significant difference (81.3% vs 89.6%, p = 0.24). Of the 96 randomized mothers, 85% chose the new wrap. During the hospital stay, six mothers dropped out and remaining 90 mothers who were discharged with the intention of continuing Kangaroo Mother Care, 78 and 12 mothers did so with the new and traditional wrap respectively. New wrap users (429.1 hours, 95% confidence interval [CI]: 351.7–470.3) performed skin-to-skin contact for an extra 77.4 hours overall than traditional wrap (351.7 hours, 95%CI: 259.3–444) users from first day to 28 day postpartum. Health workers and mothers reported positive experience with the new wrap as it was easy to wear without assistance, secure and flexible to move around in kangaroo mother care position.

Involvement of mothers and families with provision of ergonomic wraps showed improvement in kangaroo mother care practice during hospital stay and at home.