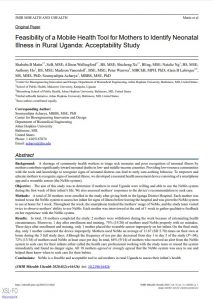 A shortage of community health workers to triage sick neonates and poor recognition of neonatal illness by mothers contribute significantly toward neonatal deaths in low- and middle-income countries. Providing low-resource communities with the tools and knowledge to recognize signs of neonatal distress can lead to early care-seeking behavior. To empower and educate mothers to recognize signs of neonatal illness, we developed a neonatal health assessment device consisting of a smartphone app and a wearable sensor (the NeMo system).

The aim of this study was to determine if mothers in rural Uganda were willing and able to use the NeMo system during the first week of their infant’s life. We also assessed mothers’ responses to the device’s recommendation to seek care.

A total of 20 mothers were enrolled in the study after giving birth in the Iganga District Hospital. Each mother was trained to use the NeMo system to assess her infant for signs of illness before leaving the hospital and was given the NeMo system to use at home for 1 week. Throughout the week, the smartphone tracked the mothers’ usage of NeMo, and the study team visited twice to observe mothers’ ability to use NeMo. Each mother was interviewed at the end of 1 week to gather qualitative feedback on her experience with the NeMo system.

In total, 18 mothers completed the study; 2 mothers were withdrawn during the week because of extenuating health circumstances. Moreover, 1 day after enrollment and training, 75% (15/20) of mothers used NeMo properly with no mistakes. Three days after enrollment and training, only 1 mother placed the wearable sensor improperly on her infant. On the final study day, only 1 mother connected the device improperly. Mothers used NeMo an average of 11.67 (SD 5.70) times on their own at home during the 5 full study days. Although the frequency of use per day decreased from day 1 to day 5 of the study (P=.04), 72% (13/18) of mothers used NeMo at least once per day. In total, 64% (9/14) of mothers who received an alert from the NeMo system to seek care for their infants either called the health care professional working with the study team or reused the system immediately and found no danger signs. All 18 mothers agreed or strongly agreed that the NeMo system was easy to use and helped them know when to seek care for their babies.

NeMo is a feasible and acceptable tool to aid mothers in rural Uganda to assess their infant’s health.