Home > Resources > Feasibility of implementation of simplified management of young infants with possible serious bacterial infection when referral is not feasible in tribal areas of Pune district, Maharashtra, India 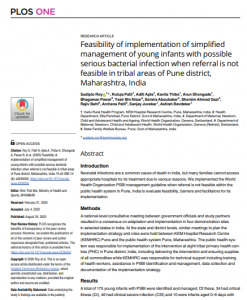 Neonatal infections are a common cause of death in India, but many families cannot access appropriate hospitals for its treatment due to various reasons. Researchers implemented the World Health Organization PSBI management guideline when referral is not feasible within the public health system in Pune, India to evaluate feasibility, barriers and facilitators for its implementation.

A national-level consultative meeting between government officials and study partners resulted in a consensus on adaptation and implementation in four demonstration sites in selected states in India. At the state and district levels, similar meetings to plan the implementation strategy and roles were held between KEM Hospital Research Centre (KEMHRC) Pune and the public health system Pune, Maharashtra. The public health system was responsible for implementation of the intervention at eight tribal primary health centres (PHC) in Pune district, India, including delivering the intervention and ensuring supplies of all commodities while KEMHRC was responsible for technical support including training of health workers, assistance in PSBI identification and management, data collection and documentation of the implementation strategy.

A total of 175 young infants with PSBI were identified and managed. Of these, 34 had critical illness (CI), 46 had clinical severe infection (CSI) and 10 were infants aged 0–6 days with fast breathing (FB) while 85 infants aged 7–59 days had fast breathing. Assuming a 10% incidence of PSBI among all live births, with 3071 live births recorded, the actual incidence of PSBI found in the study was 5.7%, resulting in an actual coverage was of 57%. Among the 90 infants with CI, CSI and FB in 0–6 days, who were advised referral to government tertiary care centre as per the PSBI guideline algorithm, 81 (90%) accepted referral while 9 (10%) refused and were offered treatment at primary health centres (PHC) with a seven-day course of injectable gentamicin and oral amoxicillin. All infants with FB in 7–59 days were offered treatment at PHCs as per the PSBI guideline algorithm with a seven-day course of oral amoxicillin. All except six infants who died and one with FB in 7–59 days, who was lost to follow-up, were successfully cured. Of the six who died, five had CSI and one had CI. Among the 81 infants with CI, CSI and FB in 0–6 days who accepted referral; 48(53%) were successfully referred to government tertiary facility while 33 (36.6%) preferred to visit a private tertiary health facility. The implementation strategy demonstrated a relatively high fidelity, acceptance and intervention penetration. Lack of training and confidence of the public health staff were major challenges faced, which were resolved to a large extent through supportive supervision and re-trainings.