Home > Resources > For every child, every right: The Convention on the Rights of the Child at a Crossroads 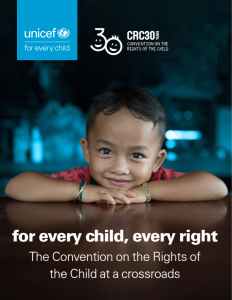 Thirty years ago, the United Nations General Assembly adopted the Convention on the Rights of the Child at a moment of rapid global change marked by the end of apartheid, the fall of the Berlin Wall and the birth of the World Wide Web. These developments and more brought momentous and lasting evolution, as well as a sense of renewal and hope for future generations. In a reflection of that hopeful spirit, the Convention has since become the most widely ratified human rights treaty in history.

In the three decades following the adoption of the Convention on the Rights of the Child, in spite of an exploding global population, we have reduced the number of children missing out on primary school by almost 40 per cent. Three decades ago, polio paralyzed or killed almost 1,000 children every day. Today, 99 per cent of those cases have been eliminated. Many of the interventions behind this progress – such as vaccines, oral rehydration salts and better nutrition – have been practical and cost-effective. The rise of digital and mobile technology and other innovations have made it easier and more efficient to deliver critical services in hard-toreach communities and to expand opportunities.

In other areas, however, the sense of renewal and hope for children’s rights is muted. In a very real sense, the Convention stands at a crossroads. It is time to choose the path towards fully realizing its vision.
Having achieved historic progress, the Convention stands at a crossroads. The expectations raised by the Convention have been met by historic gains achieved since 1989 in many aspects of children’s rights. Many of those gains are outlined in the ‘Achievements’ section of this report. They are sweeping and undeniable.