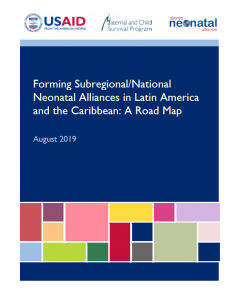 Even for countries that have made great strides in reducing mortality and morbidity, national rates often conceal significant inequities among vulnerable populations within countries. For instance, in the Dominican Republic, El Salvador, and Guatemala, neonatal mortality is three times greater among the poorest newborns than the wealthiest (UNICEF 2016).

In response to this situation, a group of passionate newborn health advocates in 2005 created the LAC Neonatal Alliance as a collaborative group seeking to prioritize newborn health in the LAC region.

This document identifies major steps needed to create a subregional or national neonatal alliance. They are recommendations based on experiences of Latin American and Caribbean (LAC) Neonatal Alliance members at the regional and country level. It articulates a shared strategic approach and aims to serve as a resource for countries within the LAC region to create their own alliances considering their local context.