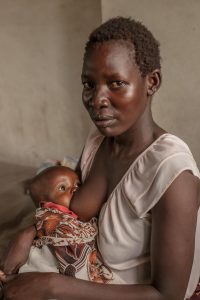 Mabior*, who has pneumonia, is breastfed by his mother at Bor State Hospital in South Sudan. BACKGROUND Baby Mabior* had been having difficulty breathing for a month before his mother Ayen* was able to bring him to Bor State Hospital, where he was treated by Save the Children nurses. At the hospital, Save the Children staff immediately diagnosed Mabior* with pneumonia after seeing his labored breathing and flaring nostrils. He was given an IV of antibiotics Benzylthine Penicillin and Gentamicine. They then monitored Mabior’s* progress over the course of 2-3 days to see if he needed further treatment. There is an oxygen generator at the hospital but there is no electricity to power it so health workers are unable to provide pneumonia patients with the quick-fix oxygen they need. The hospital relies on solar power for lights, and – when there is enough fuel – a generator is turned on for emergency surgery. Mabior* was also found to be suffering from Severe Acute Malnutrition. After being measured and weighed, Save the Children health workers gave him F-75 – a ‘starter’ milk formula given to severely malnourished children in order to stabilize them. Ayen* had to save up money for the one hour journey by truck from her home to the hospital, and arrange for a relative to look after her 4 year old daughter. Ayen* lost a third child during the conflict and is fearful of leaving her children alone. She has been struggling to provide food and shelter for her family whilst her husband is away fighting in the war. Ayen* wants to be breastfeed Mabior* properly but says her milk often runs out. She’s hungry and relies on handouts from her brother in law. For the past month she has eaten one meal a day of sogham mixed with sugar. The Ministry of Health provides drugs to Bor State Hospital but Save the Children supplements supplies when they run low. There are also long delays for medication to arrive. For example, hospital staff requested a fresh batch of antibiotics to treat malaria and pneumonia in November, but the drugs didn’t arrive until May due to lack of access during the ongoing conflict. They are already running low again.

Social media utilization is on the rise globally, and the potential of social media for health behavior campaigns is widely recognized. However, as the landscape of social media evolves, so do techniques used to optimize campaign dissemination.

The primary aim of this study was to evaluate the impact of 4 material dissemination paths for a breastfeeding social media marketing campaign in Ghana on exposure and engagement with campaign material.

Campaign materials (n=60) were posted to a Facebook and Twitter campaign page over 12 weeks (ie, baseline). The top 40 performing materials were randomized to 1 of 4 redissemination arms (control simply posted on each platform, key influencers, random influencers, and paid advertisements). Key performance indicator data (ie, exposure and engagement) were extracted from both Facebook and Twitter 2 days after the material was posted. A difference-in-difference model was used to examine the impact of the dissemination paths on performance.

At baseline, campaign materials received an average (SD) exposure of 1178 (670) on Facebook and 1071 (905) on Twitter (n=60). On Facebook, materials posted with paid advertisements had significantly higher exposure and engagement compared with the control arm (P<.001), and performance of materials shared by either type of influencer did not differ significantly from the control arm. No differences in Twitter performance were detected across arms.

Paid advertisements are an effective mechanism to increase exposure and engagement of campaign posts on Facebook, which was achieved at a low cost.