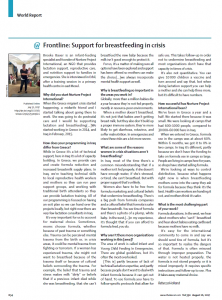 Brooke Bauer is an infant-feeding specialist and founder of Nurture Project International, an NGO that provides lactation support, reproductive care, and nutrition support to families in emergencies. She is interviewed in Erbil, after a training session in a primary health centre in east Mosul.

Why did you start Nurture Project International?
When the Greece migrant crisis started happening, a midwife friend and I started talking about going there to work. She was going to do postnatal care and I would be supporting lactation and breastfeeding[…]We started working in Greece in 2014, and Iraq in February, 2015.

How does your programming in Iraq differ from Greece?
While in Greece it’s a lot of technical support, here in Iraq it’s a lot of capacity building. In Greece, we provide care and create formula reduction and increased breastmilk supply plans. In Iraq, we’re teaching technical skills to local reproductive health workers and mothers so they can run peer support groups, and working with traditional birth attendants so they can provide lactation training. All of our programming is focused on having an exit plan so we can hand over the projects locally, but right now there are very few lactation consultants in Iraq.

It’s very important for us to account for maternal choice. Sometimes, moms choose formula, whether because of past trauma or something else. Trauma can be perceived mental trauma from the birth or, in crisis areas, it could be mental trauma from fighting or terrorism. If a woman has experienced trauma, she might not want to breastfeed because of the trauma itself or because of cultural beliefs surrounding the trauma. For example, the belief that trauma and stress makes milk “dirty” or beliefs that if a previous infant died while she was breastfeeding, that she can’t breastfeed the new baby because the milk isn’t good enough to protect it.

For us, it’s a matter of making sure all options have been explored and support has been offered so mothers can make the choice[…]we always incorporate mental health support as well.

Why is breastfeeding so important in the areas you work in?
Globally, more than a million babies die a year because they’re not fed properly, mostly in resource-poor environments. When a mother doesn’t breastfeed, it’s not just that babies aren’t getting breast milk, but they also don’t build up a proper immune system, they’re more likely to get diarrhoea, rotavirus, and suffer malnutrition. In emergencies and crises these risks are a lot more severe.

What are some of the reasons women in crisis situations aren’t breastfeeding?
In Iraq, most of the time there’s a common misunderstanding that if a mother isn’t fed properly, if she doesn’t have enough water, if she’s stressed, or tired, she can’t breastfeed. But with proper support that’s unlikely. Women also have to be free from formula marketing and cultural beliefs that undermine breastfeeding. There’s a big push from formula companies and a cultural belief that formula is safer than breastmilk. You see tins of formula and there’s a photo of a plump, white baby. In the west,[…]in my experience, it’s thought that if you can afford to formula feed, you do.

Why aren’t there more organisations working in this [area]?
The area of work is called Infant and Young Child Feeding In Emergencies. There are global guidelines, but it’s often the most overlooked. [This is] partly because of lack of technical lactation expertise, and partly because people don’t want to deal with infant formula because it can get out of hand. To use formula you have to follow specific protocols that allow for safe use. This takes follow-up in order not to undermine breastfeeding and most organisations don’t have that capacity in times of crisis. It’s also not quantitative. You can give 10 000 children a vaccine and turn around and say that, but when doing lactation support you can help a mother and she can help three more, but it’s difficult to have numbers.

How successful has Nurture Project International been?
We’ve been in Greece a year and a half. We started there because it was small. We were looking at camps that had 600–1000 people, compared to 30 000–60 000 here in Iraq. When we entered in Greece, formula use in the camps was at about 60%. Within 6 months, we got it to 0% in two camps. In Iraq it’s different, partly because we don’t have the funding to take on formula use in camps so large. People are living in camps here for years, so shops have started selling formula. We’re looking at ways to control distribution, because what happens right now is when breastfeeding mothers come into the camp they ask for formula because they think it’s the best. Health-care workers are handing it out, and mothers think it’s safer.

What is the most challenging part of your work?
Formula donations. In the west, we hear about mothers who “can’t” breastfeed and hear about babies eating cardboard because mothers have no milk. It’s easy for the international community to come in and say we should send tins of formula, but it’s so important to realise the dangers of that. Formula is often misused through improper preparation. The water is not heated properly, the formula is not stored properly, or it is mixed improperly. It requires specific instructions and follow-up to use. Plus it takes away maternal choice.