Home > Resources > Gender-related differences in care-seeking behaviour for newborns: a systematic review of the evidence in South Asia 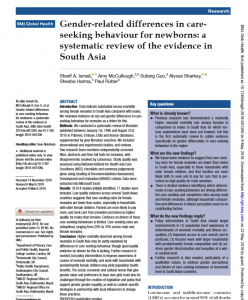 Data indicate substantial excess mortality among female neonates in South Asia compared with males. We reviewed evidence on sex and gender differences in care-seeking behaviour for neonates as a driver for this.

Of 614 studies initially identified, 17 studies were included. Low quality evidence across several South Asian countries suggests that care-seeking rates for female neonates are lower than males, especially in households with older female children. Parents are more likely to pay more, and seek care from providers perceived as higher quality, for males than females. Evidence on drivers of these care-seeking behaviours is limited. Care-seeking rates are suboptimal, ranging from 20% to 76% across male and female neonates.

Higher mortality observed among female neonates in South Asia may be partly explained by differences in care-seeking behaviour, though good quality evidence on drivers for this is lacking. Further research is needed, but policy interventions to improve awareness of causes of neonatal mortality, and work with households with predominantly female children may yield population health benefits. The social, economic and cultural norms that give greater value and preference to boys over girls must also be challenged through the creation of legislation and policy that support greater gender equality, as well as context-specific strategies in partnership with local influencers to change these practices.