Home > Resources > Global, regional, and national estimates of levels of preterm birth in 2014: a systematic review and modelling analysis 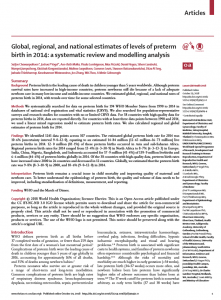 Preterm birth is the leading cause of death in children younger than 5 years worldwide. Although preterm survival rates have increased in high-income countries, preterm newborns still die because of a lack of adequate newborn care in many low-income and middle-income countries. We estimated global, regional, and national rates of preterm birth in 2014, with trends over time for some selected countries.

Preterm birth remains a crucial issue in child mortality and improving quality of maternal and newborn care. To better understand the epidemiology of preterm birth, the quality and volume of data needs to be improved, including standardisation of definitions, measurement, and reporting.