Home > Resources > Global, regional, and national causes of under-5 mortality in 2000–15: an updated systematic analysis with implications for the Sustainable Development Goals 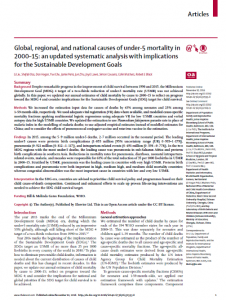 Despite remarkable progress in the improvement of child survival between 1990 and 2015, the Millennium Development Goal (MDG) 4 target of a two-thirds reduction of under-5 mortality rate (U5MR) was not achieved globally. In this paper, we updated our annual estimates of child mortality by cause to 2000–15 to refl ect on progress toward the MDG 4 and consider implications for the Sustainable Development Goals (SDG) target for child survival.

We increased the estimation input data for causes of deaths by 43% among neonates and 23% among 1–59-month-olds, respectively. We used adequate vital registration (VR) data where available, and modelled cause-specific mortality fractions applying multinomial logistic regressions using adequate VR for low U5MR countries and verbal autopsy data for high U5MR countries. We updated the estimation to use Plasmodium falciparum parasite rate in place of malaria index in the modelling of malaria deaths; to use adjusted empirical estimates instead of modelled estimates for China; and to consider the eff ects of pneumococcal conjugate vaccine and rotavirus vaccine in the estimation.

In 2015, among the 5·9 million under-5 deaths, 2·7 million occurred in the neonatal period. The leading under-5 causes were preterm birth complications (1·055 million [95% uncertainty range (UR) 0·935–1·179]), pneumonia (0·921 million [0·812 –1·117]), and intrapartum-related events (0·691 million [0·598 –0·778]). In the two MDG regions with the most under-5 deaths, the leading cause was pneumonia in sub-Saharan Africa and preterm birth complications in southern Asia. Reductions in mortality rates for pneumonia, diarrhoea, neonatal intrapartumrelated events, malaria, and measles were responsible for 61% of the total reduction of 35 per 1000 livebirths in U5MR in 2000–15. Stratifi ed by U5MR, pneumonia was the leading cause in countries with very high U5MR. Preterm birth complications and pneumonia were both important in high, medium high, and medium child mortality countries; whereas congenital abnormalities was the most important cause in countries with low and very low U5MR.