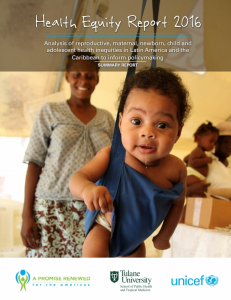 Over the last decade, Latin America and the Caribbean has experienced rising incomes and countries in the region have substantially improved health-care coverage for people who live in poverty as well as health outcomes for most of their populations. Nineteen of thirty-three Latin American and Caribbean countries are now classified by the World Bank as upper-middle income countries. Yet progress has been uneven, and regional and national averages for income and social indicators reveal wide inequalities between and within countries. This is extremely apparent in the areas of reproductive, maternal, neonatal, child and adolescent health (RMNCAH).

As countries consider how to implement the 2030 Agenda for Sustainable Development to achieve the Sustainable Development Goals, it is vital that national priorities and development goals for the next 15 years address the current health inequities in Latin America and the Caribbean, reflect the needs of the most vulnerable populations and be based on current evidence. As a contribution to this effort, UNICEF partnered with the Tulane University Collaborative Group for Health Equity in Latin America to review the available evidence on health inequity in the region. The resulting report, Health Equity Report 2016: Analysis of Reproductive, Maternal, Newborn, Child and Adolescent Health Inequities in Latin America and the Caribbean to Inform Policymaking, draws on over 700 sources, including a review of published research findings and household surveys (Demographic and Health Surveys, Multiple Indicator Cluster Surveys, Reproductive Health Surveys and other national surveys) undertaken from 2008 to 2014, to generate evidence of current health inequities and underscore the need for better data, particularly within countries at the subnational level.

This summary report draws on the findings of the Health Equity Report 2016 to illustrate the health inequities affecting children, women and adolescents in Latin America and the Caribbean, to provide government policymakers, non-governmental organizations, civil society partners, communities and all others concerned with the rights of children, women and adolescents relevant evidence they need to recognize and reverse those inequities in health.