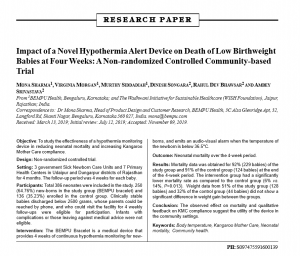 To study the effectiveness of a hypothermia monitoring device in reducing neonatal mortality and increasing Kangaroo Mother Care (KMC) compliance.

Three government Sick Newborn Care Units and seven Primary Health Centers in Udaipur and Dungarpur districts of Rajasthan for four months. The follow-up period was four weeks for each baby.

386 neonates were included in the study. 250 (64.76%) newborns in the study group (BEMPU bracelet) and 136 (35.23%) enrolled in the control group. Clinically stable babies discharged below 2500 grams, whose parents could be reached by phone, and who could visit the facility for four weekly follow-ups were eligible for participation. Infants with complications or those leaving against medical advice were not eligible.

The observed effect on mortality and qualitative feedback on KMC compliance suggest the utility of the device in the community settings.