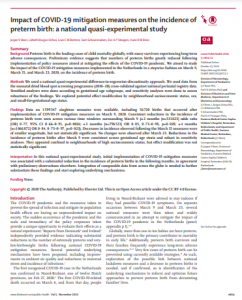 Preterm birth is the leading cause of child mortality globally, with many survivors experiencing long-term adverse consequences. Preliminary evidence suggests that numbers of preterm births greatly reduced following implementation of policy measures aimed at mitigating the effects of the COVID-19 pandemic. We aimed to study the impact of the COVID-19 mitigation measures implemented in the Netherlands in a stepwise fashion on March 9, March 15, and March 23, 2020, on the incidence of preterm birth.