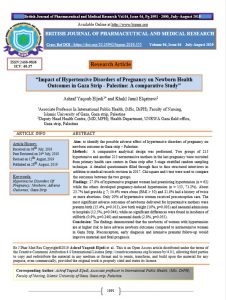 To Identify the possible adverse effect of hypertensive disorders of pregnancy on newborn outcome in Gaza strip – Palestine.

A comparative analytical design was performed. Two groups of 215 hypertensive and another 215 normotensive mothers in the last pregnancy were recruited from primary health care centers in Gaza strip after 3-stage stratified random sampling technique. A detailed questionnaire filled through face to face structured interviews in addition to medical records revision in 2017. Chi-square and t-test were used to compare the outcomes between the two groups

The findings demonstrated that the newborns of women with hypertension are at higher risk to have adverse newborn outcomes compared to normotensive women in Gaza Strip. Preconception, early diagnosis and intensive prenatal follow-up would improve maternal and fetal prognosis.