Home > Resources > Implementation of the WHO guideline on treatment of young infants with signs of possible serious bacterial infection when hospital referral is not feasible in rural Zaria, Nigeria: Challenges and solutions 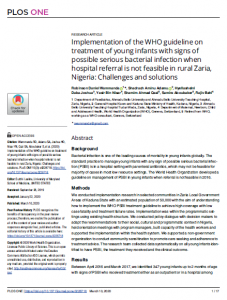 We conducted implementation research in selected communities in Zaria Local Government Areas of Kaduna State with an estimated population of 50,000 with the aim of understanding how to implement the WHO PSBI treatment guideline to achieve high coverage with low case fatality and treatment failure rates. Implementation was within the programmatic settings using existing health structure. We conducted policy dialogue with decision makers to adapt the recommendations to their social, cultural and programmatic context in Nigeria, held orientation meetings with program managers, built capacity of the health workers and supported the implementation within the health system. We supported a non-government organization to conduct community sensitization to promote care seeking and adherence to treatment advice. The research team collected data systematically on all young infants identified to have PSBI, the treatment they received and the clinical outcome.

Between April 2016 and March 2017, we identified 347 young infants up to 2 months of age with signs of PSBI who received treatment either as an outpatient or in a hospital among2,154 births in the study population. The coverage of PSBI treatment in the study area was 95.5% assuming that 10% of all births have an episode of PSBI in the first two months of life. Most (89%) sick young infants with PSBI were identified by the community-oriented resource persons and sent to the Primary Health Care Centres (PHCs). Most families (97%) refused referral and were treated at a primary health care centre on outpatient basis. There were 12 deaths (3.5%) and 17 non-death treatment failures (4.9%) in 343 infants in whom an outcome could be ascertained. While non-death treatment failure rate was highest in 0-6day infants with fast breathing (14.4%), case fatality was highest in those with signs of critical illness (20%).

We have demonstrated that outpatient treatment strategy for young infants with PSBI when referral is not feasible is implementable within the programmatic settings, achieving very high population coverage and relatively low treatment failure and case fatality rates. Implementation at scale will require government’s commitment to strengthen the health system with trained, motivated health care providers and necessary commodities.