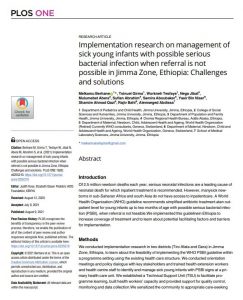 Of 2.5 million newborn deaths each year, serious neonatal infections are a leading cause of neonatal death for which inpatient treatment is recommended. However, many sick newborns in sub-Saharan Africa and south Asia do not have access to inpatient care. A World Health Organization (WHO) guideline recommends simplified antibiotic treatment at an outpatient level for young infants up to two months of age with possible serious bacterial infection (PSBI), when referral is not feasible. We implemented this guideline in Ethiopia to increase coverage of treatment and to learn about potential facilitating factors and barriers for implementation.

From September 2016 to August 2017, 6185 live births and 601 sick young infants 0-59 days of age with signs of PSBI were identified. Assuming that 25% of births were missed (total births 7731) and 10% of births had an episode of PSBI in the first two months of life, the coverage of appropriate treatment for PSBI was 77.7% (601/773). Of 601 infants with PSBI, fast breathing only (pneumonia) was recorded in 432 (71.9%) infants 7-59 days of age; signs of clinical severe infection (CSI) in 155 (25.8%) and critical illness in 14 (2.3%). Of the 432 pneumonia cases who received oral amoxicillin treatment without referral, 419 (97.0%) were successfully treated without any deaths. Of 169 sick young infants with either CSI or critical illness, only 110 were referred to a hospital; 83 did not accept referral advice and received outpatient injectable gentamicin plus oral amoxicillin treatment either at a health post or health centre. Additionally, 59 infants who should have been referred, but were not received injectable gentamicin plus oral amoxicillin outpatient treatment. Of infants with CSI, 129 (82.2%) were successfully treated as outpatients, while two died (1.3%). Of 14 infants with critical illness, the caregivers of five accepted referral to a hospital, and nine were treated with simplified antibiotics on an outpatient basis. Two of 14 (14.3%) infants with critical illness died within 14 days of initial presentation.