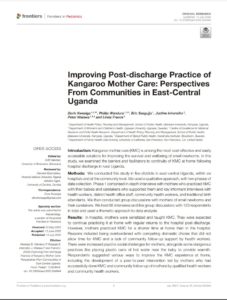 Perspectives From Communities in East-Central Uganda

Kangaroo mother care (KMC) is among the most cost-effective and easily accessible solutions for improving the survival and wellbeing of small newborns. In this study, we examined the barriers and facilitators to continuity of Kangaroo Mother Care at home following hospital discharge in rural Uganda.

We conducted this study in five districts in east-central Uganda, within six hospitals and at the community level. We used a qualitative approach, with two phases of data collection. Phase 1 comprised in-depth interviews with mothers who practiced KMC with their babies and caretakers who supported them and key informant interviews with health workers, district health office staff, community health workers, and traditional birth attendants. We then conducted group discussions with mothers of small newborns and their caretakers. We held 65 interviews and five group discussions with 133 respondents in total and used a thematic approach to data analysis.

In hospital, mothers were sensitized and taught KMC. They were expected to continue practicing it at home with regular returns to the hospital post-discharge. However, mothers practiced KMC for a shorter time at home than in the hospital. Reasons included being overburdened with competing domestic chores that did not allow time for KMC and a lack of community follow-up support by health workers. There were increased psycho-social challenges for mothers, alongside some dangerous practices like placing plastic cans of hot water near the baby to provide warmth. Respondents suggested various ways to improve the KMC experience at home, including the development of a peer-to-peer intervention led by mothers who had successfully done KMC and community follow-up of mothers by qualified health workers and community health workers.

Despite wide acceptance of KMC by health workers, challenges to effective implementation persist. Amid the global and national push to scale up KMC, potential difficulties to its adherence post-discharge in a rural, resource-limited setting remain. This study provides insights on KMC implementation and sustainability from the perspectives of key stakeholders, highlighting the need for a holistic approach to KMC that incorporates its adaptability to community settings and contexts.