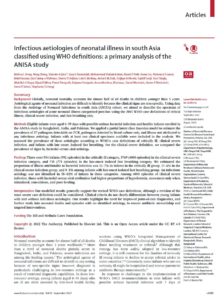 Globally, neonatal mortality accounts for almost half of all deaths in children younger than 5 years. Aetiological agents of neonatal infection are difficult to identify because the clinical signs are non-specific. Using data from the Aetiology of Neonatal Infections in south Asia (ANISA) cohort, we aimed to describe the spectrum of infectious aetiologies of acute neonatal illness categorised post-hoc using the 2015 WHO case definitions of critical illness, clinical severe infection, and fast breathing only.

Eligible infants were aged 0–59 days with possible serious bacterial infection and healthy infants enrolled in the ANISA study in Bangladesh, India, and Pakistan. We applied a partial latent class Bayesian model to estimate the prevalence of 27 pathogens detectable on PCR, pathogens detected by blood culture only, and illness not attributed to any infectious aetiology. Infants with at least one clinical specimen available were included in the analysis. We assessed the prevalence of these aetiologies according to WHO’s case definitions of critically ill, clinical severe infection, and infants with late onset, isolated fast breathing. For the clinical severe definition, we compared the prevalence of signs by bacterial versus viral aetiology.

Our modelled results generally support the revised WHO case definitions, although a revision of the most severe case definition could be considered. Clinical criteria do not clearly differentiate between young infants with and without infectious aetiologies. Our results highlight the need for improved point-of-care diagnostics, and further study into neonatal deaths and episodes with no identified aetiology, to ensure antibiotic stewardship and targeted interventions.