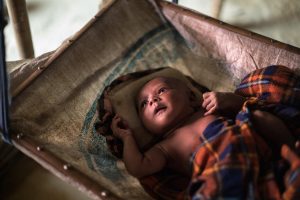 Experiments have shown improved cardiovascular stability in lambs if umbilical cord clamping is postponed until positive pressure ventilation is started. Studies on intact cord resuscitation on human term infants are sparse. The purpose of this study was to evaluate differences in clinical outcomes in non-breathing infants between groups, one where resuscitation is initiated with an intact umbilical cord (intervention group) and one group where cord clamping occurred prior to resuscitation (control group).

Randomized controlled trial, inclusion period April to August 2016 performed at a tertiary hospital in Kathmandu, Nepal. Late preterm and term infants born vaginally, non-breathing and in need of resuscitation according to the ‘Helping Babies Breathe’ algorithm were randomized to intact cord resuscitation or early cord clamping before resuscitation. Main outcome measures were saturation by pulse oximetry (SpO2), heart rate and Apgar at 1, 5 and 10 minutes after birth.

This study provides new and important information on the effects of resuscitation with an intact umbilical cord. The findings of improved SpO2 and higher Apgar score, and the absence of negative consequences encourages further studies with longer follow-up.