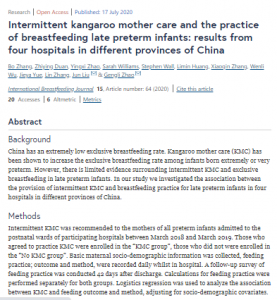 Intermittent KMC was recommended to the mothers of all preterm infants admitted to the postnatal wards of participating hospitals between March 2018 and March 2019. Those who agreed to practice KMC were enrolled in the “KMC group”, those who did not were enrolled in the “No KMC group”. Basic maternal sociodemographic information was collected, feeding practice; outcome and method, were recorded daily whilst in hospital. A follow-up survey of feeding practice was conducted 42 days after discharge. Calculations for feeding practice were performed separately for both groups. Logistics regression was used to analyze the association between KMC and feeding outcome and method, adjusting for socio-demographic covariates.