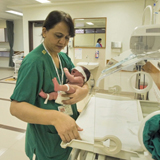 Anila Ali Bardai of Karachi, Pakistan along with Christine Sammy from Kitui, Kenya, and Netsayi Gowero of Blantyre, Malawi were selected from nominations sent from across the globe. They received their awards during the opening ceremony of 8th International Neonatal Nursing Conference 2013 in Belfast, Northern Ireland on September 6, 2013.

Pakistan has the world’s third highest number of newborn deaths. For over 10 years as a nurse at Aga Khan University Hospital in Karachi, Anila Ali Bardai has sought to improve outcomes for newborn babies. As the Head Nurse of the Neonatal – ICU, she has focused her efforts on the quality of care and raising the bar of the training of nurses and BScN students working in newborn health. She has also provided services as Senior Elective Preceptor for Post RN BScN and BScN students.

Nurse Anila also leads research and evidence-based practices in the unit and teraches students and new staff essential skills to promote proper breastfeeding and reduce infections. Importantly, she provides bereavement care and counseling to parents of sick newborns during this stressful time. Teaching Kangaroo Mother Care, guidance during breast feedings and other postnatal care are also an essential part of her work. Infection rates in the unit have decreased because of the knowledge and dedication she has and gives for newborn babies.

The award is sponored by the Council of Neonatal Nurses (COINN) and Save the Children.

Save the Children, Council of International Neonatal Nurses, INC (COINN)