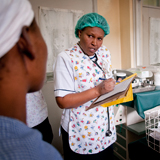 Christine Sammy from Kitui, Kenya along with Anila Ali Bardai of Karachi, Pakistan and Netsayi Gowero of Blantyre, Malawi were selected from nominations sent from across the globe. They received their awards during the opening ceremony of 8th International Neonatal Nursing Conference 2013 in Belfast, Northern Ireland on September 6, 2013.

While Kenya’s economy has become the engine of East Africa, over 41,000 newborns died in 2011. Other health indicators highlight the pressing need for increased human and financial resources to improve newborn survival. Christine Sammy, a pediatric neonatal nurse, is the Head Nursing Officer at the Ministry of Medical Services’ Kitui District Hospital. With many years of experience in antenatal care and infection control, nurse Sammy spearheaded the establishment of the hospital’s neonatal unit. A colleague pointed out that, “not only does nurse Christine demonstrate excellence in low-resource settting neonatal care, she inspires it.”

Nurse Christine considers the training of other nurses and expectant parents to be one of the most important components of her job. Whether providing breastfeeding information to expectant mothers or training new nurses on resuscitation equipment, she works with a sense of passion and commitment.

The award is sponsored by the Council of Neonatal Nurses (COINN) and Save the Children.

Council of International Neonatal Nurses, INC (COINN), Save the Children