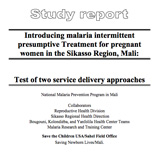 There are several recently published articles on malaria research carried out in Sikasso Region that confirm that malaria is a major public health problem.

The Malian government has adopted the Roll Back Malaria Initiative. A goal of this initiative for 2005 is to protect 60% of pregnant women against malaria by the use of a intermittent presumptive treatment (IPT) strategy and through the use of insecticide-treated bed nets (ITNs). After careful deliberations, the Malaria Prevention and Control Program Mangers of six countries agreed that the administration of two doses of sulfadoxine Pyrimethamin between four and eight months would be the best strategy to protect pregnant women against Malaria.

The IPT introduction was one of the goals of SNL /Mali Program in Bougouni. Kolondieba district had been chosen because it is one of Save the Children’s health program impact areas.