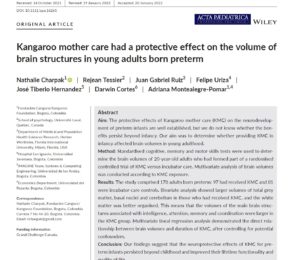 The protective effects of Kangaroo mother care (KMC) on the neurodevelopment of preterm infants are well established, but we do not know whether the benefits persist beyond infancy. Our aim was to determine whether providing KMC in infancy affected brain volumes in young adulthood.

Standardised cognitive, memory and motor skills tests were used to determine the brain volumes of 20-year-old adults who had formed part of a randomised controlled trial of KMC versus incubator care. Multivariate analysis of brain volumes was conducted according to KMC exposure.

The study comprised 178 adults born preterm: 97 had received KMC and 81 were incubator care controls. Bivariate analysis showed larger volumes of total grey matter, basal nuclei and cerebellum in those who had received KMC, and the white matter was better organised. This means that the volumes of the main brain structures associated with intelligence, attention, memory and coordination were larger in the KMC group. Multivariate lineal regression analysis demonstrated the direct relationship between brain volumes and duration of KMC, after controlling for potential confounders.