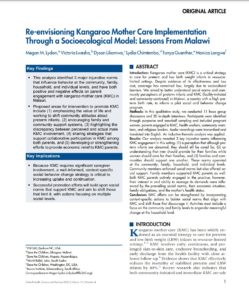 Kangaroo mother care (KMC) is a critical strategy to care for preterm and low birth weight infants in resource-limited settings. Despite evidence of its effectiveness and low cost, coverage has remained low, largely due to sociocultural barriers. We aimed to better understand social norms and community perceptions of preterm infants and KMC (facility-initiated and community-continued) in Malawi, a country with a high preterm birth rate, to inform a pilot social and behavior change program.

In this qualitative study, we conducted 11 focus group discussions and 20 in-depth interviews. Participants were identified through purposive and snowball sampling and included pregnant women, parents engaged in KMC, health workers, community members, and religious leaders. Audio recordings were transcribed and translated into English. An inductive thematic analysis was applied.