Home > Resources > Knowledge and health beliefs assessment of sickle cell disease as a prelude to neonatal screening in Ibadan, Nigeria 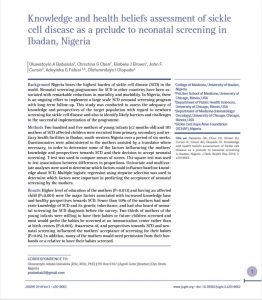 Nigeria bears the highest burden of sickle cell disease (SCD) in the world. Neonatal screening programmes for SCD in other countries have been associated with remarkable reductions in mortality and morbidity. In Nigeria, there is an ongoing effort to implement a large scale SCD neonatal screening program with long-term follow-up. This study was conducted to assess the adequacy of knowledge and perspectives of the target population with regard to newborn screening for sickle cell disease and also to identify likely barriers and challenges to the successful implementation of the programme.

Two hundred and five mothers of young infants (≤2 months old) and 181 mothers of SCD affected children were recruited from primary, secondary and tertiary health facilities in Ibadan, south-western Nigeria over a period of six weeks. Questionnaires were administered to the mothers assisted by a translator where necessary, in order to determine some of the factors influencing the mothers’ knowledge and perspectives towards SCD and their decision to accept neonatal screening. T-test was used to compare means of scores. Chi-square test was used to test associations between differences in proportions. Univariate and multivariate analyses were used to determine which factors could influence baseline knowledge about SCD. Multiple logistic regression using stepwise selection was used to determine which factors were important in predicting the acceptance of neonatal screening by the mothers.

Higher level of education of the mothers (P=0.013) and having an affected child (P<0.001) were the major factors associated with increased knowledge base and healthy perspectives towards SCD. Fewer than 50% of the mothers had moderate knowledge of SCD and its genetic inheritance, and had also heard of neonatal screening for SCD diagnosis before the survey. Two-thirds of mothers of the young infants were willing to have their babies or future children screened and most would prefer the babies be screened at an immunization center rather than at birth centers (P<0.001). Awareness of, and perspectives towards SCD and neonatal screening influenced the mothers’ acceptance of screening for their babies (P<0.05). In addition, many of the mothers would need permission from their husbands or a relative to have their babies screened.