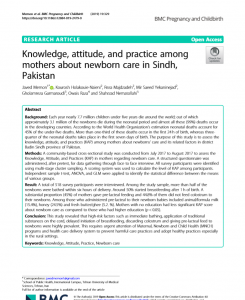 Each year nearly 7.7 million children under five years die around the world; out of which approximately 3.1 million of the newborns die during the neonatal period and almost all these (99%) deaths occur in the developing countries. According to the World Health Organization’s estimation neonatal deaths account for 45% of the under-five deaths. More than one-third of these deaths occur in the first 24 h of birth, whereas three-quarter of the neonatal deaths takes place in the first seven days of birth. The purpose of this study is to assess the knowledge, attitude, and practices (KAP) among mothers about newborns’ care and its related factors in district Badin Sindh province of Pakistan.

A community-based cross-sectional study was conducted from July 2017 to August 2017 to assess the Knowledge, Attitude, and Practices (KAP) in mothers regarding newborn care. A structured questionnaire was administered, after pretest, for data gathering through face to face interview. All survey participants were identified using multi-stage cluster sampling. A scoring system was used to calculate the level of KAP among participants. Independent sample t-test, ANOVA, and GLM were applied to identify the statistical difference between the means of various groups.

A total of 518 survey participants were interviewed. Among the study sample, more than half of the newborns were bathed within six hours of delivery. Around 50% started breastfeeding after 1 h of birth. A substantial proportion (45%) of mothers gave pre-lacteal feeding and 44.8% of them did not feed colostrum to their newborns. Among those who administered pre-lacteal to their newborn babies included animal/formula milk (15.4%), honey (24.5%) and fresh butter/ghee (5.2. %). Mothers with no education had less significant KAP score about newborn care as compared to those who had higher education (p < 0.05).

This study revealed that high-risk factors such as immediate bathing, application of traditional substances on the cord, delayed initiation of breastfeeding, discarding colostrum and giving pre-lacteal feed to newborns were highly prevalent. This requires urgent attention of Maternal, Newborn and Child Health (MNCH) programs and health care delivery system to prevent harmful care practices and adopt healthy practices especially in the rural settings.