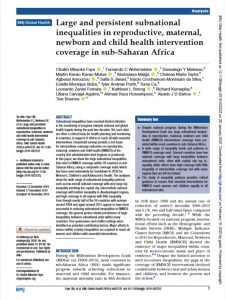 Subnational inequalities have received limited attention in the monitoring of progress towards national and global health targets during the past two decades. Yet, such data are often a critical basis for health planning and monitoring in countries, in support of efforts to reach all with essential interventions. Household surveys provide a rich basis for interventions coverage indicators on reproductive, maternal, newborn and child health (RMNCH) at the country first administrative level (regions or provinces).

Even though nearly half of the 34 countries with surveys around 2004 and again around 2015 appear to have been successful in reducing subnational inequalities in RMNCH coverage, the general picture shows persistence of large inequalities between subnational units within many countries. Poor governance and conflict settings were identified as potential contributing factors. Major efforts to reduce within-country inequalities are required to reach all women and children with essential interventions.