Home > Resources > Lessons from implementation research on community management of Possible Serious Bacterial Infection (PSBI) in young infants (0-59 days), when the referral is not feasible in Palwal district of Haryana, India 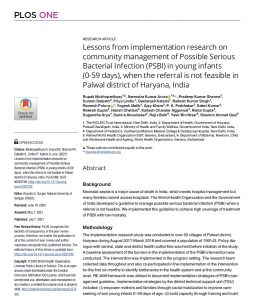 Neonatal sepsis is a major cause of death in India, which needs hospital management but many families cannot access hospitals. The World Health Organization and the Government of India developed a guideline to manage possible serious bacterial infection (PSBI) when a referral is not feasible. We implemented this guideline to achieve high coverage of treatment of PSBI with low mortality.

The implementation research study was conducted in over 50 villages of Palwal district, Haryana during August 2017-March 2019 and covered a population of 199143. Policy dialogue with central, state and district health authorities was held before initiation of the study. A baseline assessment of the barriers in the implementation of the PSBI intervention was conducted. The intervention was implemented in the program setting. The research team collected data throughout and also co-participated in the implementation of the intervention for the first six months to identify bottlenecks in the health system and at the community level. RE-AIM framework was utilized to document implementation strategies of PSBI management guideline. Implementation strategies by the district technical support unit (TSU) included: (i) empower mothers and families through social mobilization to improve care-seeking of sick young infants 0-59 days of age, (ii) build capacity through training and build confidence through technical support of health staff at primary health centers (PHC), community health centers (CHC) and sub-centers to manage young infants with PSBI signs and (iii) improve performance of accredited social health activists (ASHAs).

A total of 370 young infants with signs of PSBI were identified and managed in 5270 live births. Treatment coverage was 70% assuming that 10% of live births would have PSBI within the first two months of life. Mothers identified 87.6% (324/370) of PSBI cases. PHCs and CHCs became functional and managed 150 (40%) sick young infants with PSBI. Twenty four young infants (7-59days) who had only fast breathing were treated with oral amoxicillin without a referral. Referral to a hospital was refused by 126 (84%); 119 had clinical severe infection (CSI), one 0-6 days old had fast breathing and six had critical illness (CI). Of 119 CSI cases managed on outpatient injection gentamicin and oral amoxicillin, 116 (96.7%) recovered, 55 (45.8%) received all seven gentamicin injections and only one died. All 7-59 day old infants with fast breathing recovered, 23 on outpatient oral amoxicillin treatment; and 19 (79%) received all doses. Of 65 infants managed at either district or tertiary hospital, two (3.1%) died, rest recovered. Private providers managed 155 (41.9%) PSBI cases, all except one recovered, but sub-classification and treatment were unknown. Sub-centers could not be activated to manage PSBI.