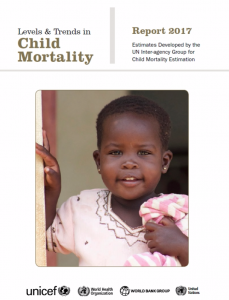 Over the past 25 years, the world has made significant progress in saving young children’s lives. The rate of child mortality fell 62 per cent from 1990–2016, with under-five deaths dropping from 12.7 million to 5.6 million.

But this progress has not been universal.

A new report from UNICEF and its partners in the Inter-Agency Group for Child Mortality Estimation (IGME), Levels and Trends in Child Mortality: Report 2017, shows the full scope of child and newborn mortality across the world. In addition to global estimates for under-five, infant and newborn mortality, the report for the first time contains estimates on mortality among children aged 5-14.

The data reveal that the rate of newborn deaths is not decreasing as quickly as that of children aged one to five. As a result, newborns account for a growing proportion of child deaths with each passing year.

Most of these deaths are entirely preventable. Prematurity, complications during labour and birth, and infections like sepsis, pneumonia, tetanus and diarrhoea are among the leading causes – all of which can be treated or prevented with simple, affordable solutions.

But these children are also dying because of who they are and the environment they were born into – whether it be an impoverished family, a marginalized community or a country consumed by conflict.

Of all society’s injustices, this is perhaps the greatest: Children in the poorest households are nearly twice as likely to die before the age of five than those from the richest. These deaths are also concentrated geographically, the majority taking place in just two regions: southern Asia and sub-Saharan Africa.

The good news is that ending preventable newborn and child deaths is possible – within our lifetime. With a concerted, coordinated effort among policymakers, businesses, healthcare workers, communities and families, we can work together to provide affordable, quality healthcare for every mother and child.