Home > Resources > Lives on the Line: An Agenda to End Preventable Child Deaths 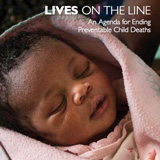 Recent improvements in child health have been remarkable. Twenty-five countries have already met the goal of a two-thirds reduction in child mortality rates by 2015, including many of the poorest, high-burden countries such as Bangladesh, Ethiopia, Liberia, Malawi, Nepal and Tanzania. For many other countries, including Cambodia, Guinea, Mozambique, Niger and Rwanda, achieving the goal in the remaining period is within their grasp.1 Many middle-income countries, from Brazil to China, have already reduced child mortality to below 2 percent or 20 births per 1,000, which is the threshold for ending preventable child deaths. 2

These gains are unprecedented. In 1960, Africa’s child mortality rate was 27 percent, today it is less than 10 percent.3 Moreover, this progress is accelerating. Sub-Saharan Africa has reduced child mortality since 2005 at five times the rate it achieved from 1990 to 1995.4 Even in countries that are lagging behind the MDG4 target, especially those in West and Central Africa, mortality rates have been reduced by 40 percent since 1990.5 For the first time in history, there is a realistic prospect of ending preventable child deaths within a generation.

Yet while these gains demonstrate that progress is possible, even in the poorest countries, there is no room for complacency. Each day, 18,000 children under the age of 5 years die from preventable causes, and since 1990, 216 million children have died in developing countries.6 Reductions in newborn mortality rates continue to lag behind overall reductions in child mortality.

The world as a whole remains off-track towards meeting the fourth Millennium Development Goal of a two-thirds reduction in child mortality by 2015, and an intensified global push is needed now to maximize progress in the period up to the target date. As governments and United Nations institutions work towards agreeing on a post-2015 framework, it is equally imperative that they commit explicitly to completing the job started by the MDGs, by adopting a target to end preventable child deaths.

Future progress in reducing child deaths will require new and different strategies from those used to get the world to this point. In many countries that are on track towards achieving the child mortality target, or that have made significant gains, there is a risk that progress will not be sustained unless there is a shift in approach, supported by adequate investment and political commitment over an extended period.

Currently, in 2013, the child mortality rate among newborn babies stands at 44 percent, up from 37 percent in 1990.7 Reducing the newborn mortality rate will require a massive increase in care for mothers and babies as part of a drive to achieve universal health coverage for all children and their families.

Secondly, child mortality is increasingly concentrated in particular regions and among the poorest and most structurally disadvantaged groups, including remote rural populations and urban slum dwellers. Whereas in 1990 West and Central Africa accounted for 17 percent of child mortality, in 2013 that figure has risen to 30 percent in the region, much of it in conflict-affected and fragile states. Africa and South Asia now account for 80 percent of all child deaths globally.8 Within these regions, many more children are dying in poor households than in rich ones, with inequalities actually increasing in Africa in the 13 years since the MDGs were adopted. Reducing child mortality will depend on strategies to improve equity, including removing barriers to health and nutrition for the poorest families and expanding access to health care in contexts where state capacity is weak and conflict and insecurity is widespread.

While progress has presented new challenges, one persistently tough challenge that also requires stepped up attention is malnutrition. Progress in reducing malnutrition, an underlying cause of 45 percent of child deaths, remains stagnant and threatens to jeopardize overall progress. Stunting, which is caused by chronic malnutrition, has been cut by just one-third since 1990.9

An intensified global effort to sustain progress and complete the unfinished business of the MDGs will require increased resources focused on all these challenges. At the moment, many of the countries with a high burden of child mortality are under-investing in health and nutrition, and failing to deliver against existing commitments. Increased funding for essential health care and nutrition needs to be matched by adequate investment in health workers, without whom many key interventions cannot be delivered. It is estimated that 46 million women give birth each year without the support of a skilled health worker, and 57 countries fall below the World Health Organization’s recommended minimum ratio of 23 doctors, nurses and midwives for every 10,000 people.10

However, the experience of countries that have made major inroads into child mortality demonstrates that resources alone are not enough. There is new and compelling evidence that catalyzing action often plays a critical role. For example, a

Lancet analysis of high-impact nutrition interventions helped to lay the foundation for commitments to prevent 20 million cases of stunting and to double the aid for nutrition at this year’s Nutrition for Growth conference. An enabling environment for change usually underpins evidence of progress towards MDG4. This includes high-level political champions taking action in response to public demand led by civil society organizations including NGOs, religious groups and professional associations. The experience of Sierra Leone, where a popular mobilization helped secure a commitment to free health care for mothers and children in 2010, is a case in point.

Finally, progress often rests on broad based partnerships. Child mortality is not simply a health challenge, but also a political, economic and social challenge. Reducing child mortality rates requires broad coalitions for change that marshal knowledge, resources, political commitment and accountability for results. This was the insight that drove the creation of the UN Secretary General’s strategy for women’s and children’s health, Every Woman, Every Child, in 2010. New and innovative partnerships at global, national and local levels are needed to build an unstoppable movement in every country and community where children continue to die from preventable causes.

The Save the Children global campaign, EVERY ONE, is one part of that wider movement for change. It is rooted in our experience of working to protect and promote children’s health and nutrition, over 90 years and in more than 100 countries, and in the partnerships we have forged. We believe that this can be the generation to end preventable child deaths, and ensure that every child’s right to survive is realized, no matter where they are born. This report sets out that agenda.