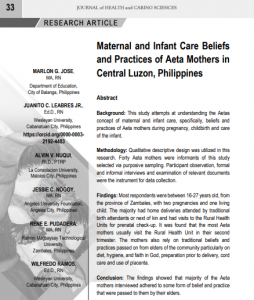 This study attempts at understanding the Aetas concept of maternal and infant care, specifically, beliefs and practices of Aeta mothers during pregnancy, childbirth and care of the infant.

Qualitative descriptive design was utilized in this research. Forty Aeta mothers were informants of this study selected via purposive sampling. Participant observation, formal and informal interviews and examination of relevant documents were the instruments for data collection.

Most respondents were between 16-27 years old, from the province of Zambales, with two pregnancies and one living child. The majority had home deliveries attended by traditional birth attendants or next of kin and had visits to the Rural Health Units for a prenatal check-up. It was found that most Aeta mothers usually visit the Rural Health Unit in their second trimester. The mothers also rely on traditional beliefs and practices passed on from elders of the community particularly on diet, hygiene, and faith in God, preparation prior to delivery, cord care and use of placenta.

The findings showed that the majority of the Aeta mothers interviewed adhered to some form of belief and practice that were passed to them by their elders.

Stakeholders such as government and nongovernment organizations should pursue promoting and enriching beliefs and practices of the Aeta and reinforcing programs with an emphasis on indigenous minorities to follow safe delivery and motherhood practices that are culturally acceptable.