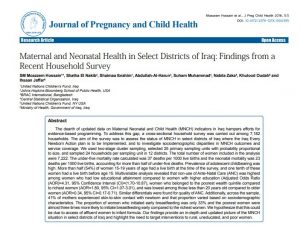 The dearth of updated data on Maternal Neonatal and Child Health (MNCH) indicators in Iraq hampers efforts for
evidence-based programming. To address this gap, a cross-sectional household survey was carried out among 7,182 households. The aim of the survey was to assess the status of MNCH in select districts of Iraq where the Iraq Every Newborn Action plan is to be Implemented, and to investigate sociodemographic disparities in MNCH outcomes and service coverage. We used two-stage cluster sampling, selected 25 primary sampling units with probability proportional to size, and sampled 24 households per sampling unit in 12 districts. The total number of women included in the analysis were 7,222. The under-five mortality rate calculated was 37 deaths per 1000 live births and the neonatal mortality was 23 deaths per 1000 live births, accounting for more than half of under-five deaths. Prevalence of adolescent childbearing was high. More than half (54%) of women 15-19 years of age had a live birth at the time of the survey, and one tenth of these women had a live birth before age 15. Multivariable analysis revealed that non-use of Ante-Natal Care (ANC) was highest among women who had low educational attainment compared to women with higher education (Adjusted Odds Ratio (AOR)=4.31, 95% Confidence Interval (CI)=(1.70-10.87), women who belonged to the poorest wealth quintile compared to richest women (AOR=1.80, 95% CI=1.07-3.01), and was lowest among those less than 20 years old compared to older women (AOR=0.34, 95% CI=0.17-0.71). Similar differentials were found for quality of ANC. Additionally, across the sample, 41% of mothers experienced skin-to-skin contact with newborn and that proportion varied based on sociodemographic
characteristics. The proportion of women who initiated early breastfeeding was only 33% and the poorest women were almost three times more likely to initiate breastfeeding early compared to the richest women. We hypothesize that this could be due to access of affluent women to infant formula. Our findings provide an in-depth and updated picture of the MNCH situation in select districts of Iraq and highlight the need to target interventions to rural, uneducated, and poor women.