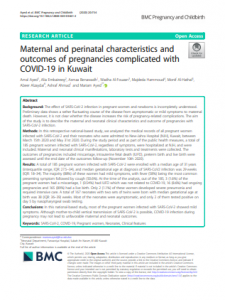 The effect of SARS-CoV-2 infection in pregnant women and newborns is incompletely understood. Preliminary data shows a rather fluctuating course of the disease from asymptomatic or mild symptoms to maternal death. However, it is not clear whether the disease increases the risk of pregnancy-related complications. The aim of the study is to describe the maternal and neonatal clinical characteristics and outcome of pregnancies with SARS-CoV-2 infection.

In this retrospective national-based study, we analyzed the medical records of all pregnant women infected with SARS-CoV-2 and their neonates who were admitted to New-Jahra Hospital (NJH), Kuwait, between March 15th 2020 and May 31st 2020. During the study period and as part of the public health measures, a total of 185 pregnant women infected with SARS-CoV-2, regardless of symptoms, were hospitalized at NJH, and were included. Maternal and neonatal clinical manifestations, laboratory tests and treatments were collected. The outcomes of pregnancies included miscarriage, intrauterine fetal death (IUFD), preterm birth and live birth were assessed until the end date of the outcomes follow-up (November 10th 2020).