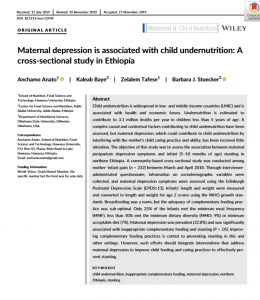 Child undernutrition is widespread in low- and middle-income countries (LMIC) and is associated with health and economic losses. Undernutrition is estimated to contribute to 3.1 million deaths per year in children less than 5 years of age. A complex causal and contextual factors contributing to child undernutrition have been assessed, but maternal depression, which could contribute to child undernutrition by interfering with the mother’s child caring practice and ability, has been received little attention. The objective of this study was to assess the association between maternal postpartum depression symptoms and infant (5–10 months of age) stunting in northern Ethiopia.

A community-based cross-sectional study was conducted among mother–infant pairs (n = 232) between March and April 2018. Through interviewer administrated questionnaire, information on sociodemographic variables were collected, and maternal depression symptoms were assessed using the Edinburgh Postnatal Depression Scale (EPDS≥13). Infants’ length and weight were measured and converted to length and weight for age Z scores using the WHO growth standards. Breastfeeding was a norm, but the adequacy of complementary feeding practice was sub-optimal.

Only 25% of the infants met the minimum meal frequency (MMF), less than 10% met the minimum dietary diversity (MMD; 9%) or minimum acceptable diet (7%). Maternal depression was prevalent (22.8%) and was significantly associated with inappropriate complementary feeding and stunting (P < .05). Improving complementary feeding practices is central to preventing stunting in this and other settings. However, such efforts should integrate interventions that address maternal depression to improve child feeding and caring practices to effectively prevent stunting.