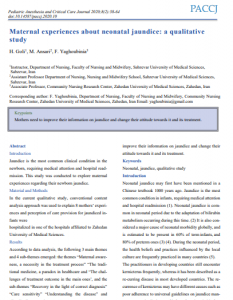 Neonatal jaundice may first have been mentioned in a Chinese textbook 1000 years ago. Jaundice is the most common condition in infants, requiring medical attention and hospital readmission.

Neonatal jaundice is common in neonatal period due to the adaptation of bilirubin metabolism occurring during this time. It is also considered a major cause of neonatal morbidity globally, and is estimated to be present in 60% of term infants, and 80% of preterm ones.

During the neonatal period, the health beliefs and practices influenced by the local culture are frequently practiced in many countries.