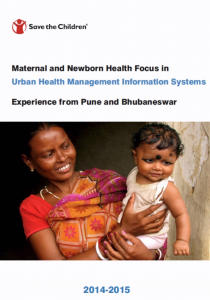 Slum population in India is growing fast (25.1% decadal growth – Census 2011). Its health and nutrition indicators are worse than that of the non-slum urban areas and comparable to that of rural India.

The HUHM recognizes that lack of disaggregated data collected at local and/or city level impedes efficient planning with focus on the urban poor, and that data availability is a critical need.