Home > Resources > Measuring postnatal care contacts for mothers and newborns: An analysis of data from the MICS and DHS surveys 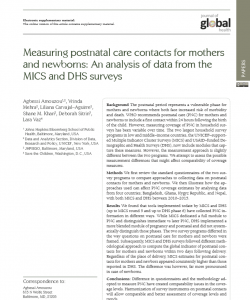 The postnatal period represents a vulnerable phase for mothers and newborns where both face increased risk of morbidity and death. WHO recommends postnatal care (PNC) for mothers and newborns to include a first contact within 24 hours following the birth of the child. However, measuring coverage of PNC in household surveys has been variable over time. The two largest household survey programs in low and middle–income countries, the UNICEF–supported Multiple Indicator Cluster Surveys (MICS) and USAID–funded Demographic and Health Surveys (DHS), now include modules that capture these measures. However, the measurement approach is slightly different between the two programs. We attempt to assess the possible measurement differences that might affect comparability of coverage measures.

We first review the standard questionnaires of the two survey programs to compare approaches to collecting data on postnatal contacts for mothers and newborns. We then illustrate how the approaches used can affect PNC coverage estimates by analysing data from four countries; Bangladesh, Ghana, Kygyz Republic, and Nepal, with both MICS and DHS between 2010–2015.

We found that tools implemented to date by MICS and DHS (up to MICS round 5 and up to DHS phase 6) have collected PNC information in different ways. While MICS dedicated a full module to PNC and distinguishes immediate vs later PNC, DHS implemented a more blended module of pregnancy and postnatal and did not systematically distinguish those phases. The two survey programs differred in the way questions on postnatal care for mothers and newborns were framed. Subsequently, MICS and DHS surveys followed different methodological approach to compute the global indicator of postnatal contacts for mothers and newborns within two days following delivery. Regardless of the place of delivery, MICS estimates for postnatal contacts for mothers and newborns appeared consistently higher than those reported in DHS. The difference was however, far more pronounced in case of newborns.

Difference in questionnaires and the methodology adopted to measure PNC have created comparability issues in the coverage levels. Harmonization of survey instruments on postnatal contacts will allow comparable and better assessment of coverage levels and trends.