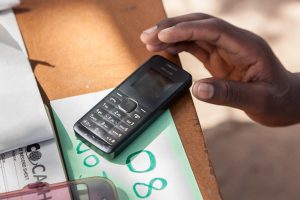 Alister, sets his mobile phone at the desk of a mobile cash agent who will exchange his mobile money account to cash in the Binga district of Zimbabwe. When the El Niño-induced drought caused his family's crops to fail and put their food security in danger, Alister left school and left his home in rural Zimbabwe to beg for money and food on the streets of the nearest city with his blind grandmother. Any money he was able to get he would send back to his mother and the eight children she looked after. Alister's family was later identified by their community to be food insecure and were chosen to be recipients of Save the Children's mobile phone cash transfer project. Save the Children sends a monthly cash transfer to families like Alister's through a mobile phone banking platform. When money is deposited in their account, families receive an sms on their phone and can then go to local agents who will provide them with cash. Alister's family uses the cash to pay for a monthly food supply and school books for the children. Alister is now off the streets and back in school.

Aponjon (meaning “near and dear ones”), a mobile phone-based mHealth service, customized voice messages for expectant (6–42 weeks pregnancy) and new mothers (1–52 weeks after delivery) for promotion of recommended healthcare practices. The Aponjon system sent two voice messages per week to subscribers, tailored to the timing during pregnancy or post-partum. The current study is an external evaluation of the effect of Aponjon use on knowledge and behaviors related to maternal and newborn health (MNH) care.

We implemented an observational study of Aponjon users with propensity score matched non-users in Bangladesh. Subscribers with at least 3 months exposure to Aponjon and non-users were interviewed retrospectively on knowledge and practices surrounding MNH. The sample included women with infants ≤6 months (243 users; 369 non-user) for maternal health knowledge and practice indicators and women with infants > 6 to 12 months old (332 users; 454 non-user) for neonatal health knowledge and practice indicators. Data were analyzed using principal component analysis and categorized as ‘high’ and ‘low’ at the median of principal component scores. Interactions between duration of use of Aponjon services and self-reported patterns of receiving and listening to messages were examined to assess the effect on knowledge and practices for MNH.

The use of Aponjon services for at least 6 months, with a good-pattern of receiving and listening to the messages, was associated with improved knowledge and practices related to MNH care.