Home > Resources > Midwifery continuity of care: A scoping review of where, how, by whom and for whom? 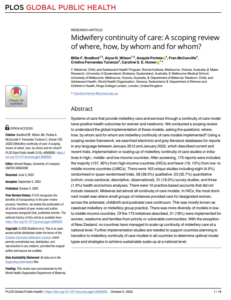 Systems of care that provide midwifery care and services through a continuity of care model have positive health outcomes for women and newborns. We conducted a scoping review to understand the global implementation of these models, asking the questions: where, how, by whom and for whom are midwifery continuity of care models implemented? Using a scoping review framework, we searched electronic and grey literature databases for reports in any language between January 2012 and January 2022, which described current and recent trials, implementation or scaling-up of midwifery continuity of care studies or initiatives in high-, middle- and low-income countries. After screening, 175 reports were included, the majority (157, 90%) from high-income countries (HICs) and fewer (18, 10%) from low- to middle-income countries (LMICs). There were 163 unique studies including eight (4.9%) randomised or quasi-randomised trials, 58 (38.5%) qualitative, 53 (32.7%) quantitative (cohort, cross sectional, descriptive, observational), 31 (19.0%) survey studies, and three (1.9%) health economics analyses. There were 10 practice-based accounts that did not include research. Midwives led almost all continuity of care models. In HICs, the most dominant model was where small groups of midwives provided care for designated women, across the antenatal, childbirth and postnatal care continuum. This was mostly known as caseload midwifery or midwifery group practice. There was more diversity of models in low- to middle-income countries. Of the 175 initiatives described, 31 (18%) were implemented for women, newborns and families from priority or vulnerable communities. With the exception of New Zealand, no countries have managed to scale-up continuity of midwifery care at a national level. Further implementation studies are needed to support countries planning to transition to midwifery continuity of care models in all countries to determine optimal model types and strategies to achieve sustainable scale-up at a national level.