Home > Resources > Monitoring the implementation and scale-up of a life-saving intervention for preterm and small babies: Facility-based Kangaroo Mother Care 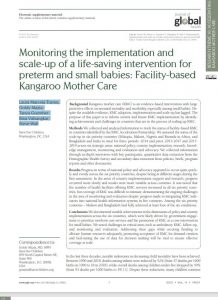 Kangaroo mother care (KMC) is an evidence-based intervention with large protective effects on neonatal mortality and morbidity, especially among small babies. Despite the available evidence, KMC adoption, implementation and scale-up has lagged. The purpose of this paper is to inform current and future KMC implementation by identifying achievements and challenges in countries that are in the process of scaling up KMC.

We collected and analyzed information to track the status of facility-based KMC in countries identified by the KMC Acceleration Partnership. We assessed the status of the scale-up in six priority countries (Ethiopia, Malawi, Nigeria and Rwanda in Africa, and Bangladesh and India in Asia) for three periods: 2014 and prior, 2015-2017 and 2017-2019 across six strategic areas: national policy, country implementation, research, knowledge management, monitoring and evaluation and advocacy. We collected information through in-depth interviews with key participants, quantitative data extraction from the Demographic Health Survey and secondary data extraction from policies, briefs, program reports and other documents.

Progress in terms of national policy and advocacy appeared to occur quite quickly and evenly across the six priority countries, despite being at different stages during the first assessment. In the areas of country implementation support and research, progress occurred more slowly and results were more variable across countries. It was noted that the number of health facilities offering KMC services increased in all six priority countries, but coverage of KMC was difficult to estimate, demonstrating the ongoing challenges in the area of monitoring and evaluation despite progress made in integrating KMC indicators into national health information systems in five countries. Among the six priority countries – Malawi and Bangladesh had fully achieved at least four of the six conditions.