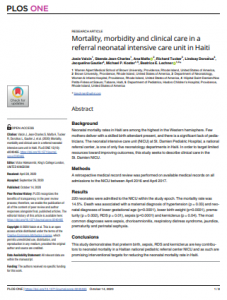 Neonatal mortality rates in Haiti are among the highest in the Western hemisphere. Few mothers deliver with a skilled birth attendant present, and there is a significant lack of pediatricians. The neonatal intensive care unit (NICU) at St. Damien Pediatric Hospital, a national referral center, is one of only five neonatology departments in Haiti. In order to target limited resources toward improving outcomes, this study seeks to describe clinical care in the St. Damien NICU.