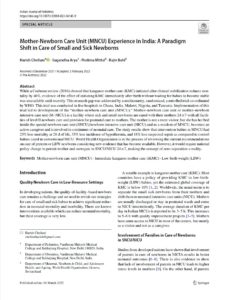 While a Cochrane review (2016) showed that kangaroo mother care (KMC) initiated after clinical stabilization reduces mortality by 40%, evidence of the effect of initiating KMC immediately after birth without waiting for babies to become stable was unavailable until recently. This research gap was addressed by a multicountry, randomized, controlled trial co-ordinated by WHO. This trial was conducted in five hospitals in Ghana, India, Malawi, Nigeria, and Tanzania. Implementation of this trial led to development of the “mother-newborn care unit (MNCU).” Mother-newborn care unit or mother-newborn intensive care unit (M-NICU) is a facility where sick and small newborns are cared with their mothers 24 × 7 with all facilities of level II newborn care and provision for postnatal care to mothers. The mother is not a mere visitor, but she has her bed inside the special newborn care unit (SNCU)/newborn intensive care unit (NICU) and as a resident of MNCU, becomes an active caregiver and is involved in continuum of neonatal care. The study results show that intervention babies in MNCU had 25% less mortality at 28 d of life, 35% less incidence of hypothermia, and 18% less suspected sepsis as compared to control babies cared in conventional NICU. World Health Organization is in the process of reviewing the current recommendations on care of preterm or LBW newborns considering new evidence that has become available. However, it would require national policy change to permit mother and surrogate in SNCU/NICU 24 × 7, making the concept of zero-separation a reality.

In developing nations, the quality-of-facility–based newborn care remains a challenge and we need to revisit our strategies for care of small and sick babies to achieve significant reduction in neonatal mortality and morbidity. There are known interventions available which can reduce neonatal mortality, but their coverage is very low. A notable example is kangaroo mother care (KMC). Most countries have a policy of providing KMC to low-birthweight (LBW) babies, yet the estimated global coverage of KMC is below 10%. Worldwide, the usual norm is to separate the small sick newborns from their mothers and shift them to neonatal intensive care units (NICU). Mothers are usually discharged or stay in postnatal wards and come to NICU intermittently. The average duration of KMC per day in Indian NICUs is reported to be 3–5 h. This increases to 5–6 h with quality improvement projects. Mothers have some access to NICU in most of the centers, but merely as a visitor and not as a caregiver.

Involvement of Families in Care of Newborns in SNCU/NICU

Studies from developed nations have shown that involvement of parents in care of newborns in NICUs results in better neonatal outcomes. There is also evidence to show that lack of involvement of parents in NICU leads to higher stress levels in mothers. On the other hand, if parents stay in NICU for prolonged periods, it leads to improved neonatal outcomes including better rates of breast-feeding, kangaroo mother care, and shorter duration of stay in NICU. Active parental involvement also leads to better maternal outcomes in the form of less stress, anxiety, and depression among mothers. A randomized controlled trial from India showed the feasibility of family centered care to complement care of sick newborns.