Home > Resources > National, regional, and global levels and trends in neonatal mortality between 1990 and 2017, with scenario-based projections to 2030: a systematic analysis 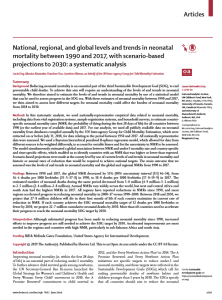 In this systematic analysis, we used nationally-representative empirical data related to neonatal mortality, including data from vital registration systems, sample registration systems, and household surveys, to estimate country-specific neonatal mortality rates (NMR; the probability of dying during the first 28 days of life) for all countries between 1990 (or the earliest year of available data) and 2017. For our analysis, we used all publicly available data on neonatal mortality from databases compiled annually by the UN Inter-agency Group for Child Mortality Estimation, which were extracted on or before July 31, 2018, for data relating to the period between 1950 and 2017. All nationally representative data were assessed. We used a Bayesian hierarchical penalised B-splines regression model, which allowed for data from different sources to be weighted differently, to account for variable biases and for the uncertainty in NMR to be assessed. The model simultaneously estimated a global association between NMR and under-5 mortality rate and country-specific and time-specific effects, which enabled us to identify countries with an NMR that was higher or lower than expected. Scenario-based projections were made at the county level by use of current levels of and trends in neonatal mortality and historic or annual rates of reduction that would be required to achieve national targets. The main outcome that we assessed was the levels of and trends in neonatal mortality and the global and regional NMRs from 1990 to 2017.

Although substantial progress has been made in reducing neonatal mortality since 1990, increased efforts to improve progress are still needed to achieve the SDG target by 2030. Accelerated improvements are most needed in the regions and countries with high NMR, particularly in sub-Saharan Africa and south Asia.